Columbus Day Weekend is usually a quiet time for me, as I catch up on reading, visit family, and relax a bit. However, this year found me experiencing an entirely different type of Columbus Day weekend; namely, a trip to Juneau Alaska! I went to represent the Province at the Episcopal ordination of our confrere, Andrew Bellisario as the sixth Bishop of the Diocese of Juneau, traveling “far away and back” from October 8 through October 12

The travels were fairly smooth, as air travel goes these days: JFK to Seattle, and onto Juneau. A windy, rainy storm greeted me on arrival, but diocesan volunteers were quite effusive in their welcome, providing transportation from airport to hotel. Joining me were confreres from the Western province, including some who had been in seminary and with Andy in ministry. There were Daughters of Charity from California, where Andy had been Provincial Director, the Vincentian Family, and friends and his family who made the trip to show their love and esteem.

The first evening there was an informal gathering at the bishop-elect’s residence on Douglas Island, across from Juneau. It has a beautiful view of the Mendenhall River, flowing from the great glacier that bears its name. After a Sunday evening Mass at the Cathedral of the Nativity of Mary, (smallest Catholic cathedral in North America), confreres, Daughters, family members, and diocesan staff gathered to enjoy an informal buffet meal, with plenty of stories and laughter.

On Monday, October 9, formal festivities began with Evening Prayer at St. Paul’s Church, the newest and largest one in the Juneau Diocese, chosen to accommodate crowds. A very moving welcome was provided by the representatives of the Alaska Native Catholic Community. Bishop Chad Zielinski, Bishop of Fairbanks served as presider. Representatives from civic and religious denominations spoke words of welcome. Bishop-elect Bellisario took the “profession of faith and oath of fidelity,” and his episcopal ring, miter, and pastoral staff was blessed. Intercessory prayers were offered by the faithful in their varied languages: Tlingit, Tagalog, Spanish, Samoan, and English. A pot-luck supper with ample food and fellowship followed in the parish hall.

Tuesday, October 10 was the Episcopal ordination and installation, once again at St. Paul’s. Bishops from Alaska, Montana, Washington, Idaho, and Texas joined the Apostolic Nuncio, Christophe Pierre, who noted this was his third trip to Alaska in 2017 to install a new bishop. Several retired and bishops emeritus of Alaska were also in attendance. Bishop Paul Etienne, Archbishop of Anchorage was Principal Consecrator, assisted by Archbishop Emeritus, Roger Schwietz, and Bishop Edward Burns, former Bishop of Juneau, now in the Diocese of Dallas.

The ordination and installation was broadcast locally and live-streamed. Those who attended prayed and sang with the two choirs, as Andy Bellasario underwent the laying-on of hands from his brother bishops, prayer of ordination, anointing of his head with sacred chrism, (“pressed down, running over” as Scripture says!), presentation of the book of the Gospels, investiture of the ring, miter, and crosier, seating in the cathedra chair, and the kiss of peace.

After communion, our confrere and new Bishop spoke movingly of the roots of his faith, provided by his deceased parents, Rocky and Mildred, both symbolically represented on his crest), and the Congregation, whom he had been part of since his days at the minor seminary in Montebello, CA. He also caused a few chuckles (and raised eyebrows) when he thanked the confreres for attending, “and especially my Provincial, Fr. Ray Van Dorpe.” Old habits die hard!

Following the ordination and installation was another reception in the school hall, ending with a dinner in Juneau for family, friends, confreres, clergy, Daughters of Charity, (including those serving in Anchorage), and the bishops. After the wet and windy arrival, we were blessed with good weather: sunny, cloudless sky, and fall-like temps, so it was easy to get out and about in Juneau. While “cruise ship-tourist season” is over, some local places were open. Alaska’s beauty was a joy to experience: its’ mountains, lakes, rivers, glaciers, clear skies, and clean air for all!

When our confrere went to Alaska in 2015 on a temporary assignment to supervise the International Mission in Anchorage, he likely never dreamed he’d end up as Shepherd of Juneau. However, Bishop Andy Bellisario reminded all present at the festivities and all he will serve how he got to this point in his life: “Jesus said, ‘Whatever you do for the least of my brothers and sisters, you did it for me.’ Thank you, Mom and Dad, for teaching me that.” It’s no wonder his Episcopal Motto is “Rich in Mercy.” (Eph.2:4) He learned it from the first and best of teachers! To view pictures of the events or to watch the Episcopal ordination and installation, please click on the picture below: https://www.flickr.com/photos/dioceseofjuneau/sets/72157687177211250 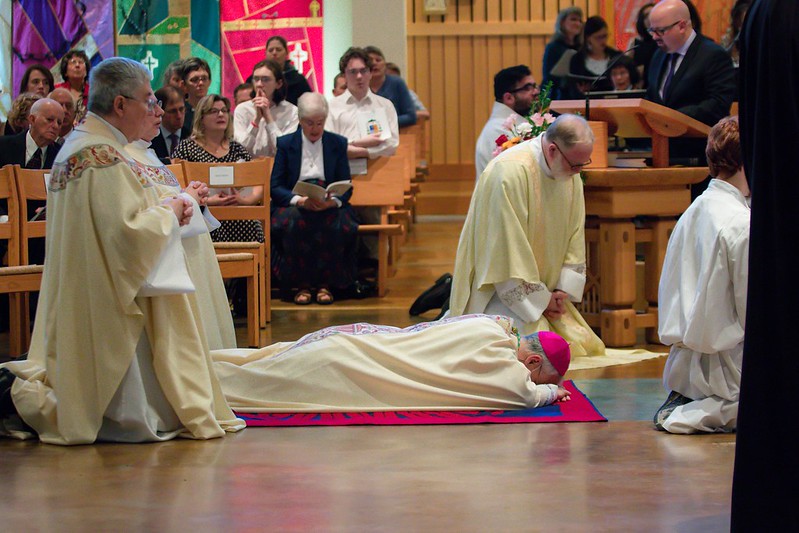